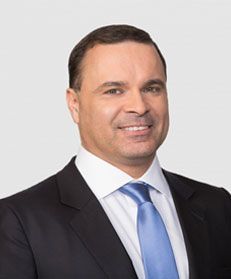 For over 20 years with FERRERE, Cerruti has advised international corporations such as Abbott, BellSouth, British American Tobacco, Cummins, Dufry, ExxonMobil, Starbucks, Vale, Volt, Weyerhaeuser, and Yamaha in Uruguay. Over this time, he has represented their interests in large-scale investments and deals. He has also headed up teams in merger and acquisition processes, including for BellSouth, CNOOC, Vale and Weyerhaeuser, in coordination with clients’ in-house counsel and with other international law firms.

In the years before joining FERRERE, Martín Cerruti was manager of Price Waterhouse’s legal and tax department (1995–1997).

He has published articles on business law and been a speaker at seminars on information technologies in Brazil, Mexico and Paraguay. He was local representative for Uruguay at the International Technology Law Association. He has been a professor of Business Companies and Corporate Finance, as well as of Company Law in the undergraduate and graduate degree at Universidad ORT (Uruguay). He is currently a professor of Mergers & Acquisitions and Commercial Contracts at the University of Montevideo.