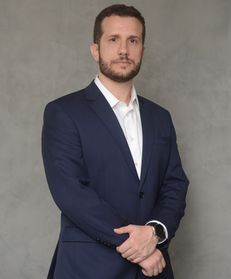 Marcelo Frazão Calmon is a partner at Campos Mello Advogados in cooperation with DLA Piper and co-head energy and natural resources sector. He advises Brazilian and foreign clients mainly on oil and gas, shipping and energy transition projects in Brazil.

Marcelo has extensive experience in mergers and acquisition, finance and multijurisdictional projects involving ships, maritime terminals and offshore infrastructure works, including with respect to oil and LNG terminals, floating storage regasification units (FSRU), floating production storage and offloading units (FPSO) and subsea construction works. In addition, he has significant experience in project finance related to energy assets and in advising Asian investors on projects in Brazil.

Marcelo is frequently sought by specialist publications to provide comments on controversial issues in Brazil. He is praised by clients as being responsive and extremely business-oriented, with a great knowledge of the Brazilian oil and gas and shipping markets, acquired over more than 15 years of experience. In the past few years, Marcelo has also been actively involved in energy transition works in Brazil, including large-scale LNG-to-power projects.

Marcelo has earned his bachelor’s degree (LLB equivalent) from the Universidade Federal Fluminense (UFF) and an LLM from the London School of Economics and Political Science (LSE).