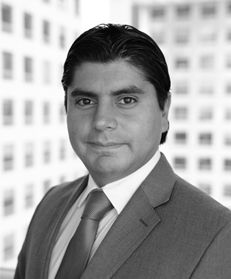 Professional experience Mr Escobedo has been with the firm since June 2015 in the corporate practice group. He is also a lawyer in the energy practice of the firm. From 2006–2009, he worked as a lawyer in Basham, Ringe and Correa in the administrative practice group. His experience includes advising in matters related to administrative procedures and regulation compliance (in connection with federal, local and municipal authorities and legislation) in areas such as hydrocarbons, urban development, infrastructure and health. He has also experience in public policy and government affairs. Since June 2015, he has been actively involved in advising ONGC in all matters related to the tenders called by the National Hydrocarbons Commission for the awarding of exploration and extraction contracts as well as regarding the energy secondary laws, administrative regulations and programs announced by the Energy Ministry related to hydrocarbons. He worked in the Mexican State Oil Company (Petróleos Mexicanos) (2009–2015) as a legislative advisor in the CEO´s office taking an active role in connection with the Mexican Energy Reform of 2013. Education Mr Escobedo is a graduate from the Law School of the Universidad Anahuac México Sur and has a master’s degree in government and public policy from the Panamerican University (Universidad Panamericana). Other formal education includes a diploma degree in lobbying and legislative procedures from the Iberoamerican University (Universidad Iberoamericana), as well as a diploma degree in energy law from the Law School (Escuela Libre de Derecho).