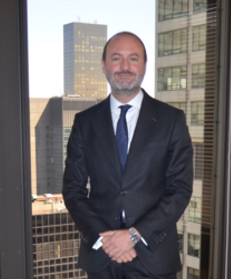 Iván Delgado joined Pérez-Llorca in 1999 and made a partner in January 2007. He is the resident partner at Pérez-Llorca’s New York office. In addition, he is responsible for the firm’s US Desk and LatAm Desk.In 2002, Iván was seconded to the London office of Slaughter and May.Studies:- 1999 Master’s degree in Legal practice, Universidad Carlos III, Madrid- 1997 Degree in Law, Universidad Carlos III, MadridIvan has more than 20 years’ experience and specialises in mergers and acquisitions of listed and unlisted companies, venture capital operations and general corporate and commercial matters. He advises industrial groups such as funds on prominent cross-border transactions in diverse sectors. His focus on advising Latin American clients has provided him with the opportunity to be involved in some of the most significant transactions in the Spanish market.Iván has extensive teaching experience. He was an associate professor of Corporate Law at Universidad Carlos III in Madrid and at the Instituto de Empresa (IE).Iván Delgado features in various legal directories such as:- Chambers Global: Corporate/M&A (Expertise based abroad in USA).- Best Lawyers®: Corporate and M&A Law and Private Equity Law.