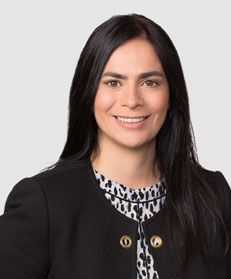 Geraldine Ifrán is a partner at FERRERE’s corporate and commercial practice group and is member of the mergers and acquisitions practice.

She advises corporate clients in different sectors of the economy and leads work teams in due diligence procedures, purchase transactions and mergers. In her 20-plus years of experience at the firm, she has been responsible for corporate advice to leading companies, including, among others: ACI Worldwide, Ahold Delhaize, Berlitz, Chevron, Key Safety Systems, Lactalis, Navios, P&G, The Hershey. She is the undisputed market leader in insurance, leading for more than 20 years the firm’s insurance and reinsurance practice and assisting companies such as AIG, HDI, Liberty Mutual, MAPFRE, MetLife, SBI (FAIRFAX), SWISS RE and Zurich, among others.

She has broad experience in mergers and acquisitions, having led FERRERE’s practice in many of the largest M&A transactions that took place in Uruguay in recent years.

Ifrán has been recognised by Chambers, IFLR, Latin Lawyer and The Legal 500. In 2020, she was recognised as a leading female transactional attorney in IFLR1000 Women Leaders. She had already been recognised by IFLR in 2018, when she was named ‘Best Female Corporate Lawyer in Latin America’ in the Women in Business Law Awards.