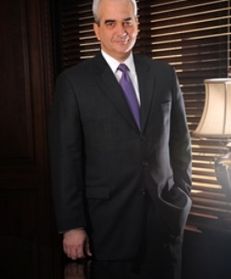 Georges Santoni-Recio has worked all his professional career at RV&HB, starting as a law clerk in 1980, becoming a partner in 1990, and then managing partner in 2000, a position that he still holds. He has developed a strong practice in foreign investment law, international trade and related matters. He is also a practicing litigator, specialising in general civil and commercial litigation.

He is only one of four lawyers to have been continuously ranked as “Leading individual - Band 1 - in Corporate/Commercial” since 2003.

He has written extensively in the fields of agency and distributorship law, foreign investment and companies law, including: “Changes in Securities Regulations; Applicability in the Privatization of State-Owned Enterprises,” for Cedempresa Law Review; “Agency and Distribution Agreements in Dominican Republic” Butterworths Treatise; Le Statut de Protection des Agents et Distributeurs, Revue St. Domingue Affaires; the Dominican chapter for the International Encyclopedia of Agency and Distribution Agreements, co-author of A practical guide for the incorporation of Dominican companies for Corporate UK and Globe Law and Business.

Georges is perfectly fluent in English and French, in addition to his native Spanish.