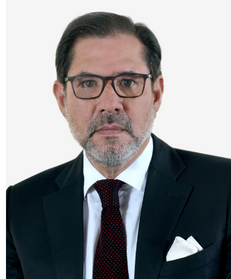 As profiled by Chambers and Partners, Mr Carmigniani is considered “one of the most important litigators in the country”. He advises local and multinational corporations in complex litigation (particularly in commercial, banking, civil, telecommunications and constitutional matters) and arbitration (both domestic and international). He regularly represents parties and sits as arbitrator in cases involving different rules (CCI, UNCITRAL and ICSID) and multiple jurisdictions.

Recent advisory work includes representing: an Ecuadorian group in an ICC arbitration with a seat in Mexico regarding a cross-border acquisition of a corporation in the dairy industry; a Mexican investor in an arbitration matter under the rules of the CIAM regarding breach of a concession contract; an Ecuadorian company in a 28 US Code § 1782 action in the courts of Florida; an Ecuadorian corporation in the successful negotiation of an exclusivity clause contained in a supply contract; and a company in several constitutional challenges of legislative measures that levy a tax on telecommunication infrastructure on different municipalities.